I was cordially invited to attend the wedding of Todd, a photographer freind, and his new bride Lisa (congratulations!) at a fantastic location (the historic D & F Tower in downtown Denver). A few days before the wedding, we frantically scrambled to find a couple girls to join Todd, Russell and I.

We had the giant clock faces, black chandeliers, a spiral staircase, a balcony, a bell tower, modern furniture, and even a bear skin rug to work with, and it did not disappoint. I only ended up shooting with model Trinity--which she said was only her second shoot. You'd never know if from the way she rocked this shoot. Here are the best 8 shots I got from the shoot (out of about 15 I edited).

We started off at the top of the building (21st floor) in the spiral staircase room:

We then had a wardrobe change and went into the clock face floor (18th):

After a break for lunch, with time before the wedding still, we had another wardrobe change and went back to the 21st floor for a few more ideas, which ended up being my favorite images of the shoot:

This shot made for a great silly pose the begged for something odd, so I played with it a bit for a bit of a morbid, cartoonish look:

Then I stuck around to do something I'd never done before - take wedding photos and video! I will say that by the end of the 11-hour day, my legs were burning from constant trips up and down five flights of stairs constantly, but it was a wonderful, once in a lifetime opportunity. Thanks again, Todd!
Posted by sleepy weasel at 8:12 PM No comments: Links to this post

Nearly Shafted at the Gold Mine Photo Shoot

It seems that no amount of planning will guarantee a perfect shoot, so it's always best to just go with the flow. So several weeks of preparation for the gold mine shoot yielded a lot of Fool's Gold, but a few real nuggets.

So Russell (the other photographer) and I originally had 3-4 models lined up, but as usual, one that originally agreed dropped off the face of the Earth (she probably had multiple grandmothers die back-to-back), and 2 others decided in days leading up to just stop communicating. So we had 1 model confirmed, and I tried to convince Russell to reschedule. We both put on a mad rush to find at least 1 more model, and he reached into his bag of tricks to rustle up a second girl.

Surprise #1: Upon arriving in Idaho Springs at the gold mine, I found out that Russell was unable to bring his lights, which made the heavy generator in the back of my car nothing more than a gasoline-scented air freshener.

Surprise #2: The owner that had granted us access informed us that he could not stay, but we might be able to ask one of the 'help.' We were told $20 could do the trick (which is all Russell had on him and I had nothing). But, oh yeah, that's only going to hold the guy for 30 minutes. So off I raced back into town to an ATM to get more cash.

Surprise #3: When the customers were finally gone and we could go into the mine to start shooting, our guide had to tag along. That brings up the awkward scenario of explaining to the guy that the 2 models were about to lose their clothing. Russell and I tactfully tried to ask him if he had any issues with "artistic" photos, at which time he tried to tell us how a shot most people like to get is with their kids holding the TNT trigger with the parents standing behind them with their fingers in their ears. OK, fail. So Russell stepped in and asked the guy if he had a bad ticker. He still didn't get it. So while Russell and I struggled for the rights words, one of our models, Jackie, was kind enough to just loudly blurt out "We're shooting nudes!" Luckily he had no issue with it, but it added a bit to the willingness of one of the girls to flaunt her good in front of him, so we had to get creative.

Fortunately, we had enough light from the solar powered bulbs still lit to shoot what we wanted. For me, it gave me these: 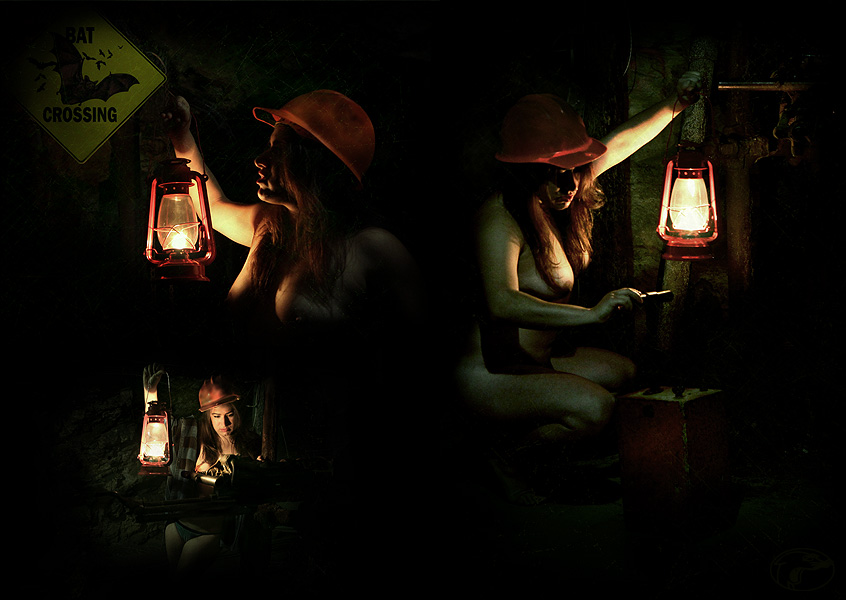 When we finished inside the mine, we were lucky that everyone else left, which allowed us pure access to anything on site, and only a small need to watch for cars driving by. I took a lot of shots of Niki on an old rusty tractor, but really only liked how this one turned out: 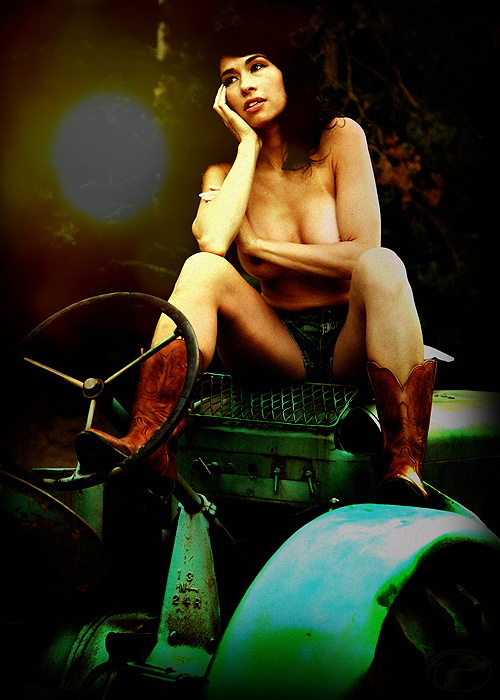 Before we lost all natural light, I envisioned something fun in front of the closed up entrance of the mine area: 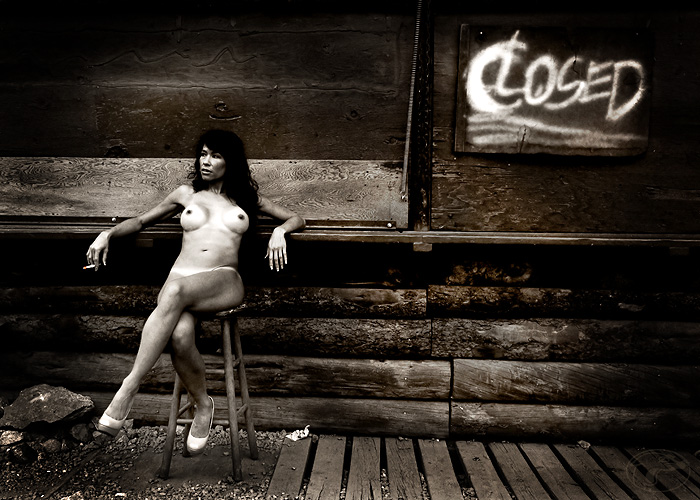 So some cash, 2-hour drive, several wasted hours tracking down models that never showed, and one really dusty car later, we chalk up another interesting location shoot.
Posted by sleepy weasel at 3:30 PM No comments: Links to this post